Raising awareness for rare diseases is extremely important. As a patient affected with a rare disease (Collagen 6 congenital muscular dystrophy) Jeanette Erdmann, director of the ICG, wants to spread the word about help and information, including potential therapies. 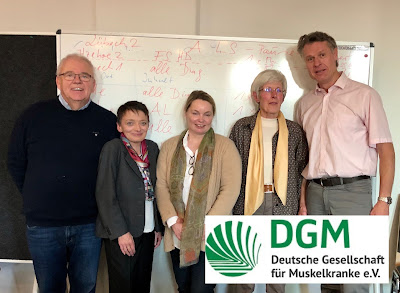 To achieve this Jeanette Erdmann candidated sucessfully for chairman of the Landesverband Schleswig-Holstein of the Deutsche Gesellschaft für Muskelkranke e.V (DGM).

The DGM (www.dgm.org) was founded in 1965 as a parent initiative supported by doctors and business people.

At that time, the primary goal was to research and combat muscle diseases (DGBM), which is why the society was initially called “Deutsche Gesellschaft Bekämpfung der Muskelkrankheiten” (German Society for Combating Muscle Diseases).

Over the years, the range of tasks has greatly expanded and the idea of self-help has gained in importance. Not only to promote research, but at the same time to support those affected and their relatives on their way with a muscle disease, this is still one of the most important goals of our organization. For this reason, since 1993 it has been called the German Society for Muscle Diseases (Deutsche Gesellschaft für Muskelkranke e.V.). (DGM).

Today the DGM has more than 8000 members and is therefore not only the oldest but also the largest self-help organisation for people with neuromuscular diseases in Germany. The DGM offers its members advice, help and the opportunity to exchange experiences with other patients. In addition, the DGM is committed to the interests of those affected in the field of health policy and specifically promotes research in the field of neuromuscular diseases.

Experts estimate that more than 100,000 people in Germany are affected by a neuromuscular disease. There are currently around 800 different known diseases, each of which is rare, in some cases extremely rare. The majority of neuromuscular diseases are hereditary and unfortunately still incurable today. For those affected, such a disease primarily means the progressive loss of their mobility. Everyday activities become hard work and can only be mastered with the help of outside help and appropriate aids. Depending on the disease, those affected have to struggle with organic weaknesses and have to reckon with a drastically shortened lifetime. Some illnesses have a considerable impact on the lives of those affected even in childhood. Other illnesses only occur in adulthood and tear the affected people and their families out of their normal lives.

Since there is no cure for these illnesses, the preservation of quality of life, the individual adaptation of soothing therapies and the optimal provision of aids are particularly important for those affected. In addition to the ever increasing physical limitations, the examination of such a diagnosis is often mentally very stressful for those affected and their families. In addition, there are often lengthy discussions with health insurance companies and other payers.

People with muscle diseases hardly have a lobby. In most cases, the diseases are too rare to be of interest for pharmaceutical-funded research. Patients not only have to learn how to deal with the disease, but also have to explain their illness to an often ignorant environment. The DGM offers patients a wide range of support and advice, initiates research and carries out important public relations work to make these diseases better known.

People with muscle diseases need your help. By supporting the DGM in its work, you can help them.